Light Fidelity (Li-Fi) is an emerging technology in the digital communications industry that will unlock new business models and use cases in multiple industry verticals, and create a significant impact on different stakeholders.

Most households, offices, and individuals around the world today connect to the internet using Wi-Fi and many face connectivity or speed issues. There is now available a technology that is 100 times faster than the currently available Wi-Fi technology and which can counter such connectivity and speed issues. Li-Fi is an emerging wireless technology that uses visible light to transmit data. This technology transmits data at a speed that is over 100 times faster than Wi-Fi and can achieve data transmission at 1 GB per second. This technology has huge potential to change everything about the way we use the Internet.

The block diagram given below shows the working principle of Li-Fi.

In simple terms, an LED lamp is equipped with a built-in modem that modulates the light using visible light communication technology and the light is detected by a Li-Fi USB key/dongle plugged into the socket of a laptop or tablet. The Li-Fi USB dongle returns data to the luminaire through an infrared link.

Will Li-Fi replace any of the current data transfer technologies?

With the unique features and advantages provided by Li-Fi, there is speculation in the market over Li-Fi replacing other technologies such as Wi-Fi and Bluetooth. We believe that, though there are a few similarities among the technologies in terms of working methodologies and application areas, Li-Fi will not replace Wi-Fi and Bluetooth technologies completely but will act as an advanced companion.

The table below highlights some key differences between Li-Fi, Wi-Fi and Bluetooth:

Li-Fi is a disruptive technology that is poised to create a large impact on many industries. The technology can unlock the potential of IoT, Industry 4.0 applications, and can generate new revenue streams as light-as-a-service (LaaS) in the lighting industry. Governments are likely to be one of the major end-users/beneficiaries of Li-Fi technology. Several governments, such as those of U.K, U.S, Dubai, China and India, are pushing towards and providing incentives to use LED lights and are planning to adopt Li-Fi technology as a part of their smart cities initiatives.

Li-Fi technology has several application areas and offers enormous advantages such as speed, security, cost benefits, and power usage savings. In the future, Li-Fi will play a crucial role in providing internet services to remote areas and in those areas where Wi-Fi technology cannot be used, such as cabins, hospitals, and underwater applications. Li-Fi can also be used in safe environments where radio waves are prohibited.

Though there are many advantages that Li-Fi provides, it has certain drawbacks too, such as limited range and light interference.

Currently, Li-Fi technology is still at a nascent stage and it will take another 5-8 years for it to mature and be deployed on a large scale. Commercial deployment in the residential space will take a few additional years, as this depends on further cost reductions, miniaturization, and integration of the receivers’ components in consumer electronics devices.

As Li-Fi is an emerging technology in the data transfer and connectivity landscape, the industry is growing through partnerships and acquisitions. Signify (formerly called Philips Lighting), which for years has been developing alternative broadband technology that transmits Internet data using light waves from LED light fittings, has entered a partnership with one of the world’s largest telecommunication firms, Vodafone, to turn the technology into a daily reality.

With this partnership, Vodafone aims to potentially make Li-Fi a part of its Deutschland’s 5G network, which the company implemented in several German cities this year. The partnership could help both companies to explore new application areas and implement Li-Fi technology on a larger scale. It will also help Vodafone’s 5G initiatives as both 5G and Li-Fi can complement each other in use cases such as communication in driverless vehicles to assist in braking and steering instructions, and also play other roles in machine-to-machine communications. 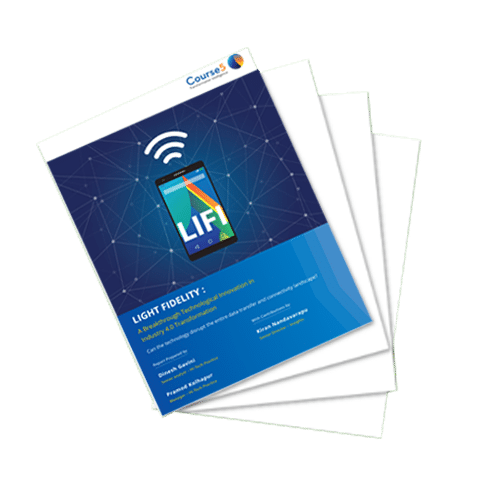 Read the Whitepaper on

What are companies like Philips and GE Lighting doing with Li-FI?How dependable is a Li-Fi connection? Will Li-Fi replace Wi-Fi any time soon? Find Answers.