Another year ‘2018’ has gone by and yet there is no trace of any other cloud player able to rival the three major cloud computing juggernauts – AWS, Google and Microsoft. Year after year, the pace at which these players launch services, products, features, etc., continues to remain the same, with no signs of them slowing down. The competition is intense and their activities are becoming more and more intriguing to watch out for. There are several enterprise tech-savvy professionals who are being extremely vigilant in monitoring each and every move/announcement from these top players.

Course5 Intelligence (Course5) has carried out a comparative analysis of these players – AWS, Google and Microsoft, for the year 2018. Course5 chose a few important parameters such as the number of announcements in terms of products and features, pricing of their services, certifications attained and many others, as part of this research study. Through the analysis of these parameters, Course5 assessed the extent of competition among these players, the strategies behind them, their products or services of focus and obtained an idea of their way forward. The analysis also covers a historical breakdown by year, of the companies’ workload, products, types, region, features, magnitude, etc.

During the period of analysis, 2018, AWS as usual, had the highest number of announcements, compared to Microsoft and Google. Compared to 2017, there was a 25% increase in AWS announcements, and their focus is shifting towards AR & VR, Robotics, and ML, with new products being introduced in these categories. The growth rate of Microsoft Azure’s product and feature announcements increased from 16% in 2017 to 18% in 2018. It would be more meaningful to understand the constituents of these numbers, which are included as part of the detailed analysis report. These numbers clearly provide cues regarding the focus areas of these companies.

When it comes to workload, Compute was the category contributing to the maximum proportion of the workload. AWS, Azure and Google were each leading in different categories of workloads. However, compared to the previous year, it could be observed that there is a gradual shift in the workload from traditional categories such as compute, storage, networking, etc., to Artificial Intelligence, Machine Learning, IoT, Security, which resonates with the emerging technologies. This shift would be more evident when it is quantified, and is elaborated as part of the research.

Price reduction continued to be one of the major strategies adopted by AWS, Azure and Google during 2018 as well, to compete with each other. However, the number of price reductions reduced significantly compared to the previous year. In 2018, Google Cloud had the highest growth in pricing announcements (63%) compared to 2017.

Regional expansion, in terms of data centers, is another parameter that was considered for comparison. All the three cloud vendors have strong presence in North America and Europe and are trying to expand into other regions such as Middle East, Africa, China and APAC. 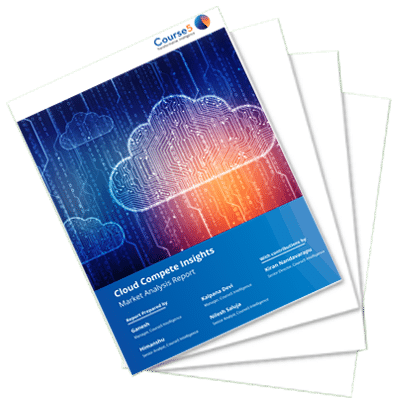 Download the entire in-depth Market Analysis Report on on

By Ganesh, Kalpana Devi, Himanshu and Nilesh Saluja with contributions by Kiran Nandavarapu

The Roadmap for AI Technologies to Remain Relevant and be Mainstream